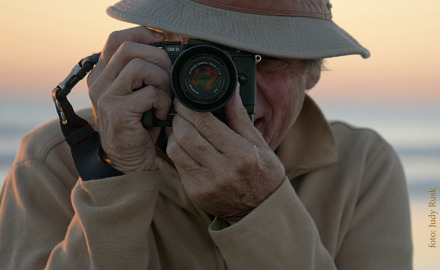 “Photographers should be seen and not heard. Shut up and shoot! The work will speak for itself…”

Gary Gruby is a self-taught fine art and commercial photographer who has made a living with his camera for over 35 years. His commercial work for advertising and corporate clients span a wide range of subjects, products and concepts, but portraits have always held his special interest and talent,  working with clients Russell Athletic, Kellogg’s, Dekalb Medical, Loews and the United Way among others.  His personal work includes award-winning botanicals, as well as the celebrated portrait collection-“A Portrait of Senoia” given as a permanent loan to the Senoia Area Historical Society. He works from midtown Atlanta, is on the Advisory Council of SlowExposures, a national, juried annual photography exhibition and conducts the Cumberland Island Safari – a weeklong retreat for artists and nature lovers in the spring and fall on Cumberland Island.                http://www.cumberlandislandsafari.com

The Last of the Fun Photographers

Every photographer has had the experience of seeing an image and passing it by. We did not stop the car, turn around, go back…. interrupt that conversation… take the photograph that was there right in front of our eyes. Many such “I wish I had taken the time” moments dot our shared lives as photographers. I came up thru a studio where everyone made a living working with a camera. But it was also the same studio that taught me that your personal work was more important than your commercial work. We emphasized exploring how much fun we could have using a camera. The studio fostered young artists and became known as the “Last Of The Fun Photographers”…. It wasn’t how much money you could make – but how much fun you could have – while making a photograph. 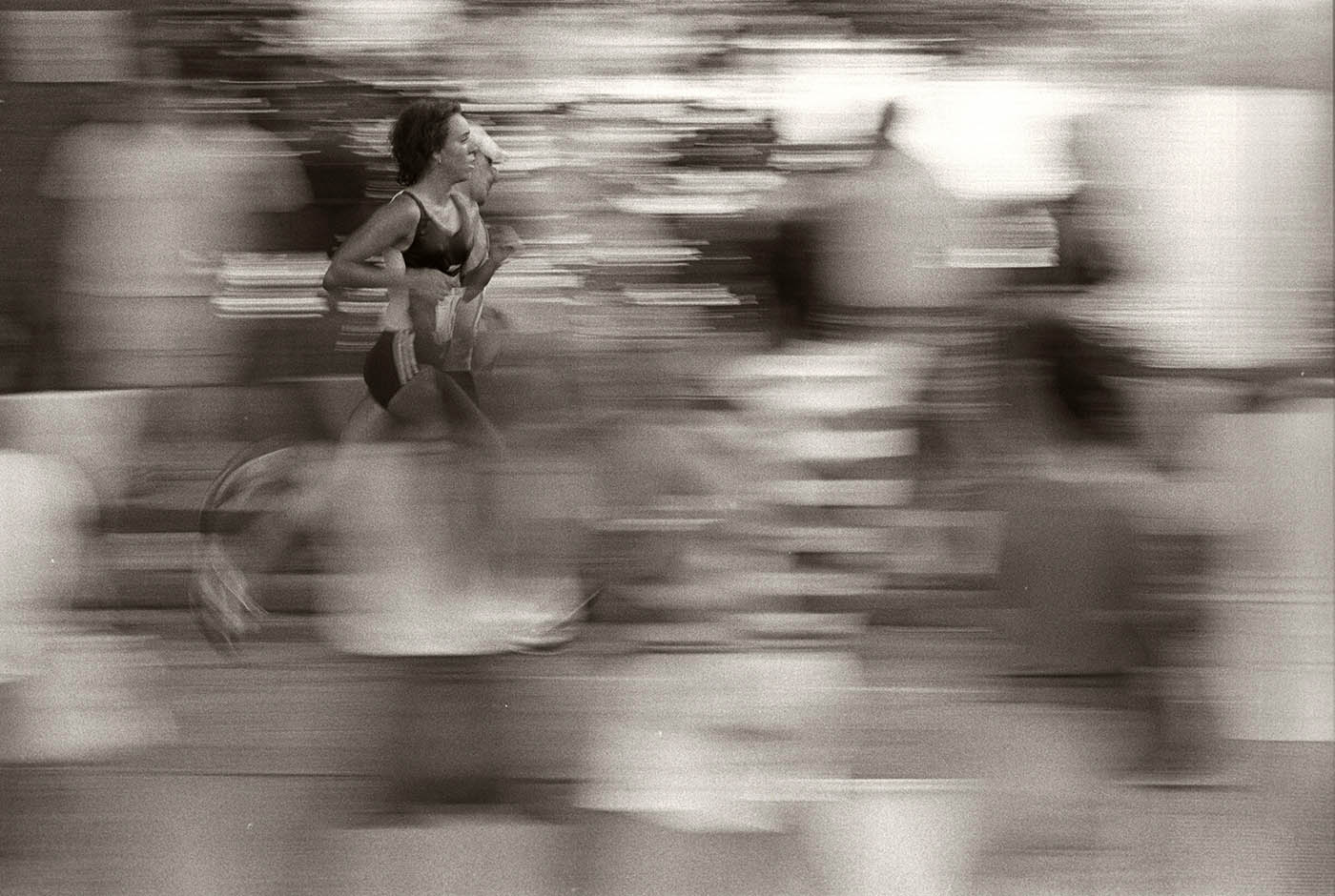 Photographs tell stories and document a window into our present – which becomes the future generation’s past – and as time capsules, are priceless gifts to ourselves. Portrait of Senoia is a collection of over 40 photographs Gruby made in the small town of Senoia, south of Atlanta, where he chose to start a family and raise two sons in the 1990’s and into the new century.

Portraits are given, not taken and these portraits bear witness to the many gifts he was given as a photographer. A community, at its heart, is made up of people and each individual has a story to tell.

“…On this weekend shooting for the United Way, there was a light rain and we were in south Atlanta where apartments were being demolished and debris was being stacked and burned. It had been raining just enough to quell the fire and the wind swept smoke thru the complex – it looked a lot like a movie set in a war zone. Thru the smoke, these two kids emerge walking slowly, going nowhere really…. Shortly thereafter, we were in an apartment home with no doors or windows, explaining to their parents what we were trying to accomplish taking these photographs, they agreed, gave us permission and signed a release. A neighbor in a bombed out unit a few doors down, was driving an old pick-up truck with a beautiful vintage grill and we walked over with the kids and took a few snaps.

During this assignment, I photographed men, women and children who were most willing to give of themselves and their images in hopes of helping those less fortunate than they. My job was to tell their story and do it in a way that showed their dignity as well.” 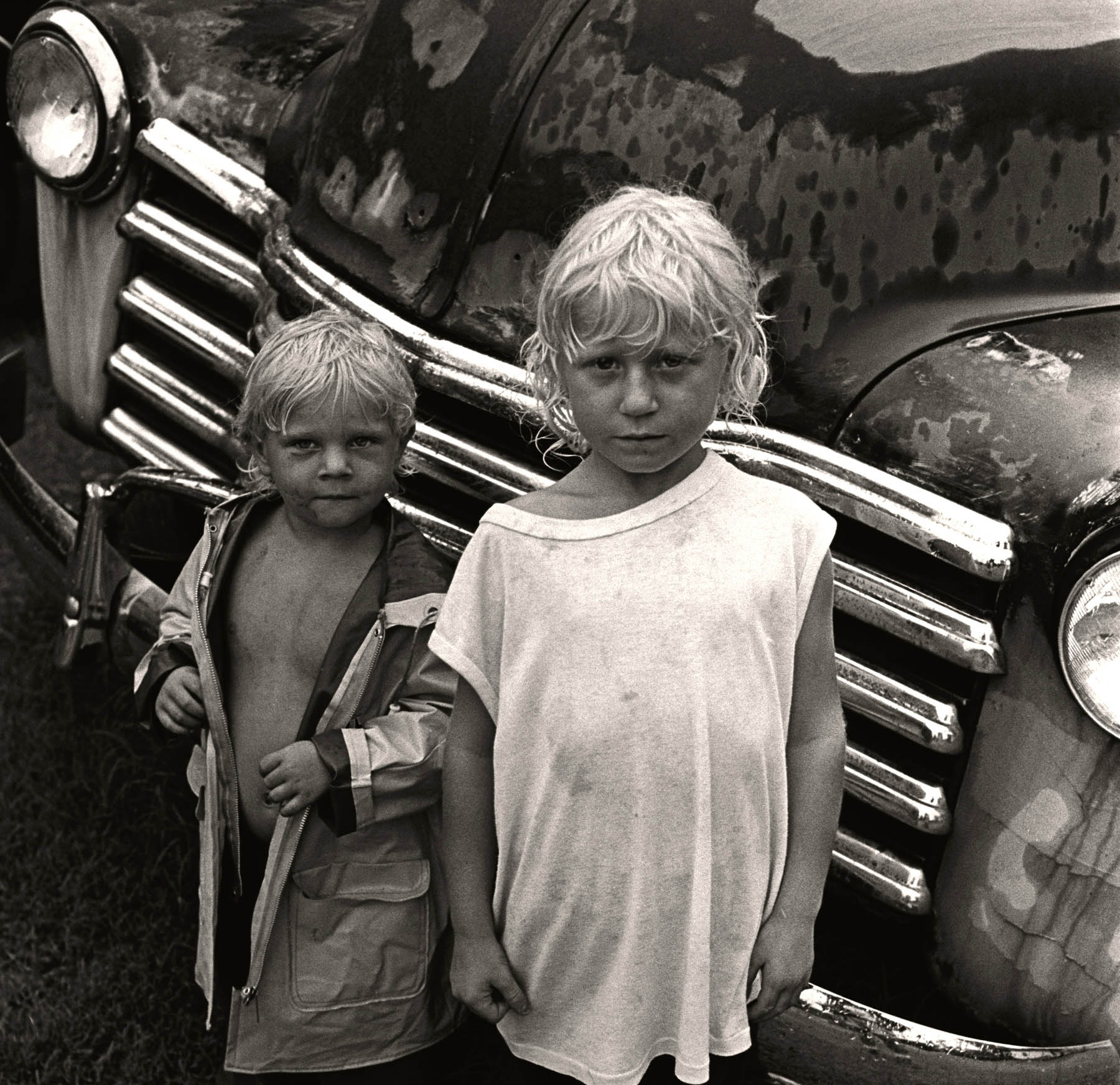